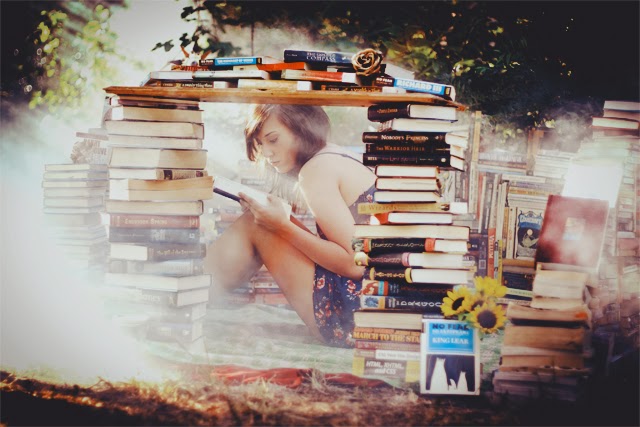 She failed the test.  In fact they hadn't seen test scores this bad for some time.  The child was obviously mentally deficient, and needed to be referred to the Special Education Department.  Upon arrival,  her teacher noted that she had difficulty following instructions.  No matter how slowly and clearly the teacher spoke, no matter how much she broke down the information into simple steps, the child just couldn't follow along.  She also had difficulty with speech.  She could barely formulate the most simple requests and preferred to nod or point or just stay silent as if in a world of her own.  She loved to sit with a book and pretend to read.  It was quite sad, really, because the child did not have the mental capacity to decode even the simplest of words.  However, she was sweet and quiet,  she never bothered anyone, so they left her alone most of the time and allowed her to pretend to read her books, occasionally turning a page as she had seen her teachers do.

Lily sat staring at the paper and pencil in front of her.  She knew that they expected her to take a test, but she couldn't understand what she was seeing.  She had just arrived from her country, Colombia, and could only speak and read in Spanish.  They showed her how to fill in the little dots with her pencil, so she filled them in randomly.  After a few days, they sent her to meet her new teacher.  She was very nice and spoke sweetly and slowly.  In the beginning, Lily couldn't understand what she was saying, but after a while she began to figure it out.  They wanted her to do baby stuff that was boring.  She picked up a book and began to try to match the words to the new sounds she was hearing. It took her a few months to teach herself to read in English.  She found that if she sat in a corner very quietly her teachers would forget about her and leave her alone.  She read a lot of books during the next few years.

This is the story that my friend Lily told me about her experience in the New York City public school system.  After several years, someone realized that she could actually read English.  She was retested and found to be exceptionally intelligent.  They quietly transferred her to a regular class.

Lily became my unofficial mentor when I started teaching in a New York City middle school in the early eighties.  We officially belonged to two departments:  the Science Department because we taught science, and the Bilingual Department because we taught our subject area in Spanish.  Our jobs were a result of the Aspira Consent Decree in which the Board of Education settled a lawsuit brought by the Puerto Rican Community precisely because of situations like the one Lily had suffered.  In order to avoid such travesties, Spanish-speaking children would be evaluated in their native language and then assigned to bilingual classrooms where they would continue their education in Spanish while receiving English as a Second Language instruction.

Mr. Pervert was in the same Bilingual Department and would serve as an unofficial mentor of an entirely nature.

Posted by Moriah Untamed at 6:16 PM