In Defense of Wikileaks

Join a New Video Project in Defense of WikiLeaks
http://is.gd/pu7fzY


Aside from predictions about the Apocolipse, I agree with everything else.
Posted by Moriah Untamed at 9:46 PM No comments:

Spread the word.
Stop the school closings!
Stop charter takeovers
Defend public education
Say no to privatization
Mayor Bloomberg's Department of Education plans to close 26 more schools this year.  Despite the DOE's claim that these school closings are aimed at reforming schools, they have instead opened the door to privately-run charter schools and have limited school options for those affected.  According to the accounts by parents, students and teachers, DOE policies have had the effect of sabotaging the schools that are slated to be closed, not "fixing" them.

Bloomberg has played a shell game with our most vulnerable children, shuffling them around from closing school to closing school.  This process has disproportionately affected students of color, only serving to further perpetuate a separate and unequal school system in New York City.

In addition to closing schools, the DOE plans to grant more public school space to charter schools through co-locations, undermining public school resources and pitting school communities against each other.

We demand quality resources and support for our public schools, not closings and privatization! 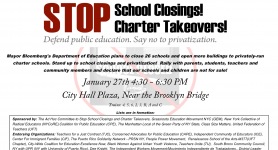 Please support the schools that are being threatened with privatization. To find out more about the Rally, visit the website of the group that has organized it: stopschoolclosing.wordress.com


Posted by Moriah Untamed at 12:59 AM No comments: