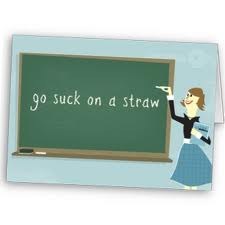 I'm particularly interested in Ms. B's ratings because she let another teacher (not me) take the wrap for something she herself did.

Back in early 2006, Ms. B. was teaching a math class that took place first and second periods.  Liar Principal S.T. had instituted the rule that no student could use the bathrooms first and second period, so Ms. B. dutifully refused to allow a student to go to the bathroom.  At the end of the math class the boy ran to his third period science class taught by my colleague K.N.  This extremely obedient child asked for a pass to the bathroom, but K.N. reminded him that he had to wait 10 minutes because the bathrooms were locked during the first ten minutes of the period (another rule imposed by Liar S.T.).  The boy couldn't wait, so he ran out in search of a bathroom.  However, they were all locked.  He had an accident in his pants, his parents were called to bring him a change of clothes, and someone filed a complaint.  Ms.  B. who had had him for two periods--a total of 90 minutes-- was not charged.  Liar S.T. who ordered the bathrooms to be locked was not charged.  My colleague K.N. was brought up on charges of physical abuse.

I was the only teacher in the building who defended K.N.

K.N. spent a year in the Rubber Room and eventually left the DOE. Ms. B. is still teaching at the school, and now we can all see her name  in the newspaper.  Despite my feelings to the contrary, I'm willing to admit that not ALL the teachers that appear in the newspapers deserve to be there,  but SOME of them, like Ms. B., deserve that and more.

Ms. B. was Liar S.T.'s best friend.  I'm sure she was useful to S.T. in mounting cases against more than one teacher, including myself.

So let's look at her ratings, shall we?

The 2007-2008 TDR tells us that Ms. B. had 6-10 yrs of teaching experience: That her multi-year score was 21, and her 2008 score was 33.  Wow!  Those scores are really low, Ms. B.  Too bad they couldn't value-add the suck-up factor--or maybe they did.  Maybe that's what value adding is all about--because nobody except the Math and ELA teachers have any idea what it means.

The 2008-2009 TDR tells us that Ms. B. had more than 3 years of teaching experience.  Her multiyear score was 17 and her 2009 score was 6.  Just in case we couldn't figure it out for ourselves, the DOE put big letters next to these numbers "BELOW AVERAGE".

The 2009-2010 TDR shows that Ms. B. had a much better year.  She was back in double-digits with a 30 for that year.  The DOE calls this an AVERAGE RATING.  The multi-year score is also back in double digits (18), but still BELOW AVERAGE.

So there you have it:    Other teachers were U-rated out of the school, but Ms. B. survived to teach year after year.  Now you know why.  It's thanks to value-added sucking-up, and the margin of error on that is infinite.
Posted by Moriah Untamed at 1:15 PM No comments: 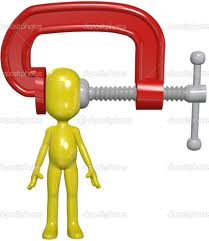 I started looking at the teacher ratings yesterday, and I had to stop because I got a headache.

It was a headache like so many others that I suffered while I was being tortured by Slave Brain Principle S.T. and the rest of the Bloomborg in my school.

The earliest ratings that are available are from 2007-2008.  I still have the year book from that year.  My memory has mercifully fogged over the names and faces of the Math and English-Language-Arts teachers, but now they are clearly smiling out from the year book.

On the published lists, teachers' names have been organized alphabetically so that you will have a hard time comparing teachers in the same school unless you have a year book or some other way of getting a list of teachers' names and the subjects they have taught.

This is all about the individual teacher:  Not about the school or the neighborhood.  Scroll down and one by one you will find the teachers, isolated from their communities, next to the numbers that are supposed to define them.

It is also just about two subject areas--Math and English-Language-Arts.  You won't find my name, because I was a science teacher.  You won't find many other names.    Social Studies, Art, Music, Computer, ESL, Speech, Guidance, and many more are not there.

I was...am angry at everyone associated with my suffering--including the other teachers in my school, not to mention the other teachers citywide.  My feeling about these published ratings?  It serves you right!  If you hadn't allowed Slave Brain S.T. to isolate and torture me, you wouldn't be publicly humiliated right now.  Learn your lesson.  An Injury To One Is An Injury To All.  Assholes.

This still isn't right on so many countless levels, so I will be Occupying teacher ratings for a while.  Now that they are out, and there's nothing you can do about it -- use them, flip them, make the Bloomborg sorry it ever thought about publishing them.

An Injury To One, Is An Injury to All.  Make the Creeps sorry!  Make them very sorry! 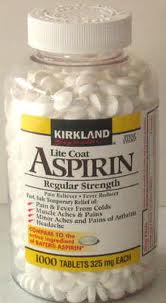 Posted by Moriah Untamed at 1:36 PM No comments:

Oh, this is going to be fun!

Teachers' Ratings To Go Public: MyFoxNY.com
Posted by Moriah Untamed at 10:36 AM No comments: