City Council Makes Late Night Vote -- And Bloombergville Was There 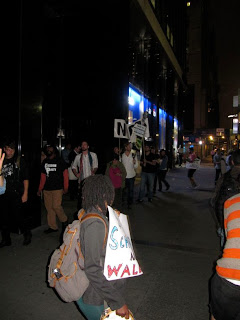 The advantage of having people on the street at all times means that they can show up at a moment's notice when politicians decide to make late night deals.


"Last night at 9pm, Bloombergville learned City Council was meeting to make last moment deals on the budget at their offices at 250 Broadway, half a block from the encampment. Postponing the General Assembly, about 2 dozen members of Bloombergville gathered banners and posters and drums and set off immediately to protest."
Read More at Bloombergville Now
Posted by Moriah Untamed at 1:34 PM 1 comment: 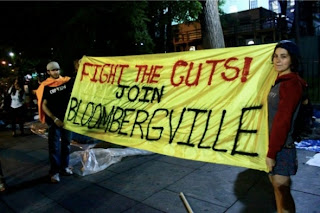 Check out Bloombergville, New York City's own camp-in.  It may not be as massive as those in Spain and Greece, but it has the advantage that it is close enough so that  you and I can actually participate in it.

Everyone who lives and or works in New York City will be affected by these austerity cuts.  Would we rather wait until things get as bad as they are in Greece before we react?

I  have been closely following the popular movements in Europe on Facebook.  They are not being adecuately covered by the media (what a surprise).  I found an interesting article which gives the perspective of a Greek citizen.  It is called, "Democracy vs Mythology: The Battle in Syntagma Square".

The writer does a good job of debunking the blame-the-victim misinformation that is being propagated through the media.  Although most of the article uses facts and figures, it ends with some powerful annecdotal evidence.

" And the biggest myth of them all: Greeks are protesting because they want the bail-out but not the austerity that goes with it. This is a fundamental untruth. Greeks are protesting because they do not want the bail-out at all. They have already accepted cuts which would be unfathomable in the UK – think of what Cameron is doing and multiply it by ten. Benefits have not been paid in over six months. Basic salaries have been cut to 550 Euros (£440) a month.
My mother, who is nearly 70, who worked all her life for the Archaeology Department of the Ministry of Culture, who paid tax, national insurance and pension contributions for over 45 years, deducted at the source (as they are for the vast majority of decent hard-working people – it is the rich that can evade), has had her pension cut to less than £400 a month. She faces the same rampantly inflationary energy and food prices as the rest of Europe.
A good friend’s grandad, Panagiotis K., fought a war 70 years ago – on the same side as the rest of Western democracy. He returned and worked 50 years in a shipyard, paid his taxes, built his pension. At the age of 87 he has had to move back to his village so he can work his “pervoli” – a small arable garden – planting vegetables and keeping four chickens. So that he and his 83 year old wife might have something to eat.
A doctor talking on Al Jazeera yesterday explained how even GPs and nurses have become so desperate that they ask people for money under the table in order to treat them, in what are meant to be free state hospitals. Those who cannot afford to do this, go away to live with their ailment, or die from it. The Hippocratic oath violated out of despair, at the place of its inception.
So, the case is not that Greeks are fighting cuts. There is nothing left to cut. The IMF filleting knife has gotten to pure, white, arthritis-afflicted bone. The Greeks understand that a second bail-out is simply 'kicking the can down the road'.  Greece’s primary budget deficit is, in fact, under 5bn Euros. The other 48bn Euros are servicing the debt, including that of the first bail-out, with one third being purely interest. The EU, ECB and IMF now wish to add another pile of debt on top of that, which will be used to satisfy interest payments for another year. And the Greeks have called their bluff. They have said 'Enough is enough. Keep your money.' "

The cuts that are being threatened are just the beginning.  Every single dollar of debt that the US government has taken on is to be paid by we, the people;  not they, the banks.  You and I will pay every cent of it out of our salaries and pensions, and so will our children, and perhaps their children.
Posted by Moriah Untamed at 11:13 AM No comments: 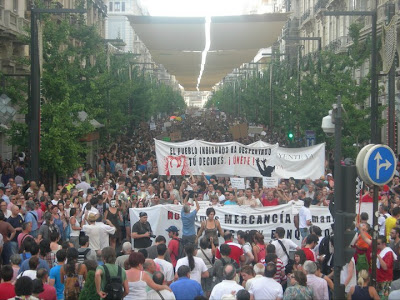 Posted by Moriah Untamed at 8:41 PM No comments:

Posted by Moriah Untamed at 8:30 PM No comments: 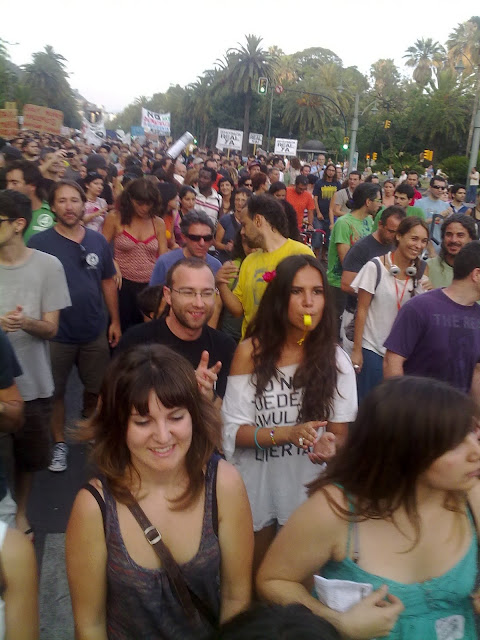 Posted by Moriah Untamed at 7:54 PM No comments:

As the demonstrators passed the Opera House, the noise interrupted a performance of "La Traviata". The actors reacted by simply moving the venue to the larger audience, to the delight of everyone.

Posted by Moriah Untamed at 7:14 PM No comments: 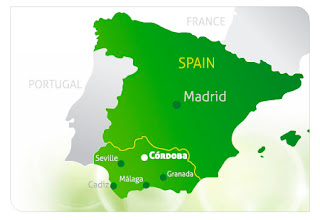 Posted by Moriah Untamed at 6:52 PM No comments: 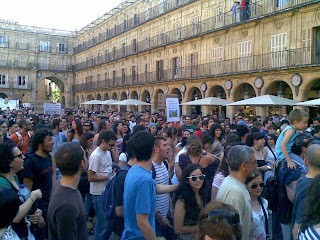 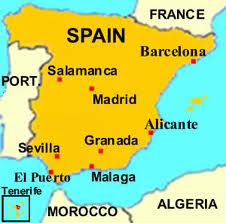 Posted by Moriah Untamed at 6:38 PM No comments:

Posted by Moriah Untamed at 4:46 PM No comments: 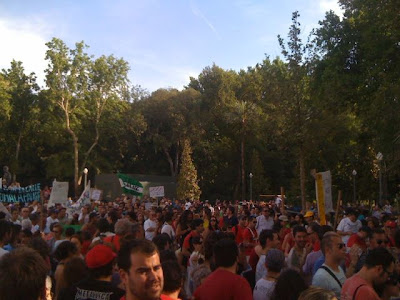 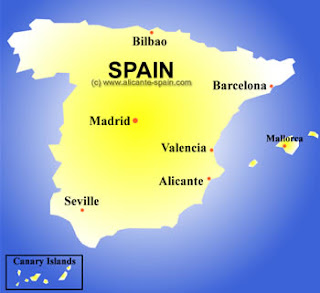 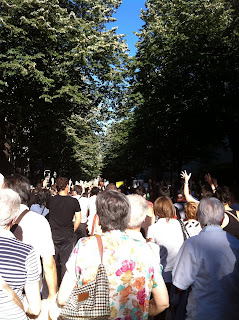 Posted by Moriah Untamed at 3:05 PM No comments: 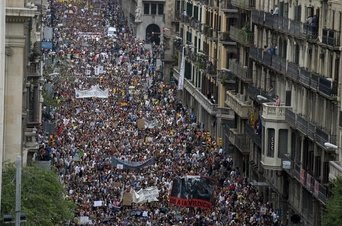 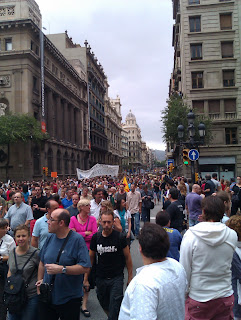 200,000 marched down Via Laietana in Barcelona.
Posted by Moriah Untamed at 2:24 PM No comments:

Europe is united now
United it may remain
Our unity in diversity
May contribute to world peace.
May there forever reign in Europe
Faith and justice
And freedom for its people
In a greater motherland.
Citizens, Europe shall flourish,
A great task calls on you.
Golden stars in the sky are
The symbols that shall unite us.

Spanish have not given up on Europe, just on banks and politicians.
Posted by Moriah Untamed at 1:48 PM No comments:

North and East Join Together

Marchers from Northern and Eastern parts of Madrid fuse together as they work their way toward Neptune where they will meet with other groups.  Each group numbers around 10,000.
Posted by Moriah Untamed at 12:45 PM No comments:

What Do One Hundred Thousand People Look And Sound Like?

View of Plaza de Neptuno from the air.
Posted by Moriah Untamed at 11:18 AM No comments:

Meet Up At Neptune Plaza 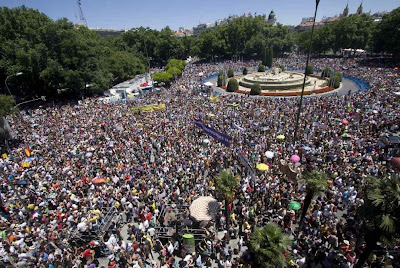 Marchers from all over Madrid converge on Plaza de Neptuno to protest the signing of the Euro Pact.


This is one group of marchers coming from the North of Madrid heading toward Neptune.

Posted by Moriah Untamed at 10:58 AM No comments: 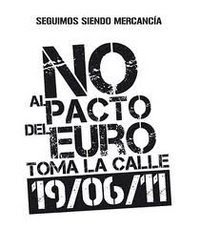 Today the Spanish people are protesting against the Euro Pact.  There are demonstrations planned in every city and town.

In Madrid, capital of Spain, they have organized marches from six different areas around the city which are supposed to meet at the Plaza de Neptuno at approximately 1:30 pm their time and then move on as one group to the Congress.

You can find the map of their routes here.

Watch on livestream here.
Posted by Moriah Untamed at 7:25 AM No comments:

Posted by Moriah Untamed at 6:11 AM No comments:

Propaganda and Control of the Public Mind-Part 1

Posted by Moriah Untamed at 11:14 AM No comments:

Check out "Spanish Revolution" and "Democracia Real Ya" on Facebook.
Posted by Moriah Untamed at 10:15 AM No comments:

The Story of Stuff

Posted by Moriah Untamed at 4:04 PM No comments:

What do they sign when they ratify the Euro Pact?

THERE ARE REASONS; ONCE AGAIN, TAKE THE STREET

ALL STREETS AND SQUARES OF SPAIN AND EUROPE

NO TO THE EURO PACT: We are not goods in the hands of politicians and bankers.

The EURO PACT: New attack on democracy ONCE AGAIN.

ONCE AGAIN, the EU leaders endorse a policy misleading the public to the benefit of large financial corporations, instead of defending the citizens.

On 27th June, all European governments, including that of Spain, will sign in Brussels a major socioeconomic daylight robbery of an international scope: the so-called Euro Pact, by which the politicians of the European Union agree to legislate the orders of the International Monetary Fund (IMF), European Central Bank (ECB) and the World Bank (WB).

Failure to comply with these orders means, the rating agencies that have led Greece, Ireland and Portugal to the ruins (Moody's, Standard & Poor's, and Fitch) will resume their attacks.

What do they sign when they ratify the Euro Pact?

- Therefore all countries should adjust their laws to the dictates of the banks, WHICH MEANS governments are ONCE AGAIN not legislating for the protection and interests of citizens but in the favour of large banking corporations and the markets.

- The retirement age will be delayed in all the countries in accordance with life expectancy.

- Enhancing competitiveness: linking wages to productivity, just like what has already been done in Spain with the latest labour reform which calls for more flexible redundancy laws, more flexible labour agreements and more flexible contracts, thus endangering the current system of collective negotiation of labour laws.

- To foster cheap lay-offs and Temporary Employment Agencies (TEA). The banks will lower the financial strains to encourage the hiring of workers, and in doing so will demolish the Social Security system and will be introducing the figure of "the perpetual intern and the perpetual precarious worker”.

- The freezing of all pensions.

- Reduction of spending on education, resulting in poorer results, which are conditions that favour and promote its ultimate privatisation.

- Increased direct and indirect taxes for citizens, small and medium businesses and penalties for not complying with the payment of these taxes through fines, interest, fees, etc.

- Changes to our constitution and that of the signatory countries with the aim of "adjusting the economy within the parameters of the IMF, ECB and World Bank” resulting in the loss of sovereignty of the people.

ONCE AGAIN, governments do not use political power to legislate and to stop the provokers of the crisis and international banks and large hedge funds, for example, stepping in against financial corporations. Instead, with the signing of the Pact of the Euro scheduled for June 27, will strengthen the large financial corporations and adopt policies that are of interest to banks and large European companies. As if we hadn´t had enough, all governments independently of their political colour, will sign this agreement to commit to large financial corporations and thus, as ever, sacrifice the citizens ONCE AGAIN, enabling the financiers to continue defrauding the world using financial products that are as sophisticated as they are risky and fraudulent, and permitting bank usury.

Using the deception that to deal with the debt crisis that grips Europe, increasing the competitiveness of national economies can only be achieved by reducing labour costs ... ONCE AGAIN.

Still there is no consideration for a public and independent audit of the public debt in order to enable citizens to know what the debt really is and what part of it actually corresponds to the banks and private equity funds which according to the data we have constitutes most of the PUBLIC DEBT.

ONCE AGAIN, we are served the impoverishment of society on a platter in benefit of expanding the great fortunes and accentuating the social divide.

In this way, the historical record of the profits of large financial corporations are ONCE AGAINenlarged even more, the record high salaries of CEOs and executives will increase even more, and thus we reach record levels of poverty and unemployment.

The difficulty of accessing this information is due to the lack of political transparency and the fear that ALL OF EUROPE will TAKE THE STREET.

THERE ARE REASONS; ONCE AGAIN, TAKE THE STREET

Spanish People Will Rally Against Euro-Pact On June 19

Volveremos a tomar las calles, ahora contra el pacto del euro
We will again take to the streets against the euro-pact

No más recortes en educación
No more cuts to our education

Exigimos que la crisis la pague quien la creo
We demand that the crisis be paid by those who created it.

Exigimos que se gobierne para el pueblo y no contra el pueblo
We demand government for the people, not against the people

Su violencia es nuestra convicción
Their violence is our conviction

http://www.democraciarealya.es/
Posted by Moriah Untamed at 2:52 PM No comments: