Copied and Pasted from miamiherald.com 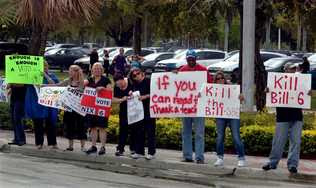 A scab driver, looking terrified, drove out of a freight depot outside Ironton, Ohio, moving through a picket line of angry, cursing independent haulers clustered at the gate.

One striker, enraged beyond control, broke from the line, pulled out a pocket knife and ran along with the slow moving truck, howling curses and stabbing at the big tires with every step.

I ran along with my camera, thinking that here was a wild-eyed union guy damn worthy of his bosses’ rancor. Four decades later, it’s hard to equate that unforgettable image of a crazed-with-anger trucker with a Florida school marm, the designated villain of labor relations, circa 2011.

Maybe I’m just hopelessly stuck in the past, head cluttered with memories of burly and grizzled union coal miners camped out on a snowy West Virginia mountainside at the mouth of a muddy driveway with a small arsenal of semi-automatic weapons handy in case things turned disagreeable. School teachers, not often armed with Uzi machine pistols or Buck knives, seem a poor substitute for an economic boogey man.

But Florida, or at least its governor, is in need of a scapegoat to rationalize brutal cuts in education. Guess who’s handy?

So public-school teachers, this session, will lose their tenure in a merit pay bill that’s about as sure a thing as anything percolating through the Legislature. The governor then intends to require teachers to pitch in five percent of their pay for pensions. For Florida’s 655,000 teachers, most of whom haven’t had a raise in several years, the new deduction won’t feel much different than a five percent pay cut.

Rick Scott then wants to cut the state education budget by 10 percent – more than $700 a student. This after successive years of cutbacks. Miami-Dade Superintendent Alberto Carvalho has warned that teacher layoffs will be unavoidable. In Broward, Superintendent James Notter said that at least least 1,270 teachers will be shown the door.

Tallahassee, to sell the saving of public education to the public, necessarily needs some loathsome targets, the living cause of Florida’s mediocre public school system. Teachers will have to do.

“This vilification… is unprecedented and it has demoralized and confused my colleagues unlike anything in my experience as a teacher,” said Paul Moore, a social studies teacher at Miami Carol City Senior High with 28 years experience. “It seems extremely powerful economic and political forces have decided that it is in their interests to make teachers insecure, to set them on edge and force them to worry about the future of themselves and their families.”

“How did it become acceptable to blame the teachers and not address the myriad of problems associated with public education?” asked Martha Barantovich, who teaches at Florida International University’s College of Education.

Imagine the demoralizing effect this stuff has had on prospective teachers at the college. Who wants to borrow money and spend years of their life getting an education degree to get a job in a state that ranks 47th in teacher pay – less than Mississippi? And then have your new employer characterize you as the greedy welfare queen of 2011?

Barantovich said the anti-teacher rhetoric was not lost on her students.

“Their goal to be quality change agents in education is being and has been undermined in the state for a while,” she said. “They are generally positive people excited about teaching, until they see what’s happening to teachers and schools and students.

“We are being made scapegoats for very deep and complex societal problems.’’

Trucker and miners being scarce commodities in 2011 Florida, I suppose teachers will just have to do.