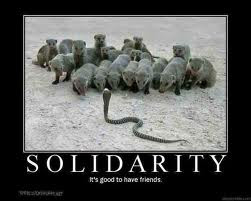 Every message I get from the UFT leadership, ends with "In Solidarity" instead of "Sincerely Yours" before a signature.

I never really paid attention to the words. It was a simple formula with which to signal the end to the message--a transition to the signature.

However, Cairo and Madison have taught us all a lesson about the word SOLIDARITY. No convenient link to Wikipedia is necessary for this concept--it is alive and well and evolving.

That was a comment to my post of Saturday, April 25, 2009 titled "Lest we forget". I had just been sent to the Rubber Room on April 6, 2009, and would remain there until I retired on November 17, 2010.  At first I thought that someone from my school--maybe the principal--was the asshole who wrote this comment.  However, knowing the Rubber Room culture as I do, I now suspect it was another Rubber Room detainee.   It is an example of a supreme lack of solidarity.  Nevertheless, the asshole was partially right.  The RR was not a bad place for me to reflect.  Here is a summary of my reflections.

LACK OF SOLIDARITY GOT US INTO THIS PICKLE.  SOLIDARITY WILL GET US OUT.
Actually this is my original "fixation" now indelibly tattooed on my soul forever as a rule to live by.
Now that a film about "banksters" has gotten an Academy Award, and many other people besides me are pointing to billionaires and their corporations as the root of our economic woes, I can now say:
WELCOME TO MY FIXATION, AMERICA.
Billionaires are not heroes.  Billionaires are really good at amassing money and power. That's all they care about.  They don't care about you except for your role in getting them more money and power.  Don't let billionaires near your children.
Large amounts of money and power have been amassed in the hands of less than 1% of the American people.  This tiny minority (the number 400 has been mentioned) now have excessive influence over our elected officials at all levels--from mayors to presidents.  They have managed to control appointments of those officials who are not elected--chancellors, for example.  They control major union officials--Randi Weingarten, for instance.
I generally oppose an US vs THEM mentality, but in this case, I make an exception.  It's US against 400 people.
"So", you might ask, "Principal Perry, the Bloomburger who persecuted you and sent you to the Rubber Room, is she one of US"?
Yes.  She definitely isn't one of THEM.   As far as the 400 are concerned she is one of THEIRS, never one of THEM.  I agree with the 400.  She is owned.  If they cut her chains, she wouldn't know what to do with herself, because she only knows how to mindlessly follow orders.  That's all she's good at.
As far as I am concerned, it is a waste of time to focus on those of us who serve the 400.  We've all been there.  We have and still do make decisions based on whether or not it will affect our jobs--because without jobs we don't have homes, food, a college education for our children.  These are the chains that bind us all.
This is where Unions come in.  Our ability to collectively bargain with the 400 takes away from their ability to control us.  They are obviously moving aggressively forward to correct that inconvenient drag on their insatiable drive for more power.
I am sitting here on a rainy day writing my blog. I didn't have to get up, get dressed, and commute to work.  My rent, my food, my clothes, my health care is paid for by my pension and other union benefits negotiated in my contract.  I do not believe for one moment that I would have these things without a union contract. I do not thank Weingarten or Mulgrew, though.  It was negotiated long before they came on the scene because teachers worked in solidarity to establish a union.
I am able to retire in dignity and relative comfort in spite of the fact that I was branded a BAD TEACHER by a billionaire's mind-slave.
I would like to call on all NYC public school teachers and their union leaders to stop looking for the BAD TEACHERS amongst you.  Stop engaging in the rhetoric invented by the billionaires to destroy solidarity.  Every time you focus on the teacher down the hall who is not quite up to snuff according to you, you are showing a lack of solidarity.  Every time you get together in the teachers' lounge and talk about what a BAD TEACHER so-and-so is, you are engaging in mobbing behavior.  Every time you come together to target a BAD TEACHER you are really just trying to offer up someone to the Bloommonster in hopes that if you feed the Ogre he will go away and leave you alone.  In reality, all he does is get fatter and hungrier.  He'll be back for more.  Whom will you offer up in sacrifice next?
The educational system is sick and corrupt.  It was bad before Bloomberg, and has just gotten worse thanks to him.  If your school were a healthy, organic social unit, where all adults--parents and teachers were working in unity and solidarity to provide the best possible education to the children, there would no such thing as a BAD TEACHER.
In solidarity,
Moriah
Posted by Moriah Untamed at 5:32 PM