Proud to Be a Union Member - Finally 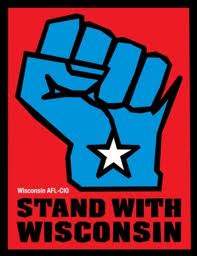 Last week I went to my first UFT meeting as a retiree.  Lucky I did, because they handed out badges that looked like this (only round).  After the meeting was over, I walked from 52 Broadway to the World Trade Center, right through the heart of Wall Street,  proudly wearing my badge.  People with expensive suits and ties looked at it, and then looked away.  Once I got into the subway station, other people looked at it, and then at me, and smiled.

If that seems a little rude and crude, please forgive me. I was bullied by a billionaire for nine years. It has changed the "lens" through which I see the world (to use a Bloomburger term).

There are three kinds of power: The power to get, the power to hold, and the power to take away. When Bloomberg came into office in 2002, he gladly would have fired every teacher in the system, converted every public school into a private charter school, and hired only those teachers who were willing to work without a union contract, i.e. low wages and no benefits. The only reason that he wasn't able to do all that was because he didn't have the power. With all his billions, and all his friends' billions, he didn't have more power than the teachers of New York City. We held on and he couldn't take away...

...not all at once, anyway. However little by little, an ounce here, a pound there, he has slipped away with little pieces of power that we thought we could spare. Nine years later, thousands of letters to file, thousands of "U" ratings, thousands of hearings, thousands of dollars in fines, thousands of teachers flung into rubber rooms or into ATR limbo, he is well on his way to reaching the goals he had at the beginning of his reign.

One of the ways that he has made us loosen our hold, has been to shame us and blame us. He accused us of perpetrating a failed system that hurts children's chances of succeeding in life. He blamed us for putting our union benefits ahead of the welfare of our students. According to him, we, the teachers put children last; he, the billionaire, put children first. Our ranks were riddled with incompetents and abusers. He would weed them out and substitute them with "supermen" like himself--only younger. We were lazy, he was hardworking. We were selfish, he was selfless. We were resistant to change, he was the agent of change.

"You're incompetent and resistant to change!"
"No, you are!"

We pushed our students to do well on his tests to prove to him that we weren't such lazy pieces of Charlie, Roger, Able, Peter.

Our union leadership rarely uses the word, "power". I just looked at the latest edition of "New York Teacher," and couldn't find the word anywhere. There is a lot of talk about rights and benefits, sacrifice and solidarity, but not power. Perhaps the word has negative connotations reminding us of those who ruthlessly dominated others--Atila the Hun, Hitler, Stalin--Bullies, despots, tyrants, overlords, slave drivers, etc.

But our power is different. Our power comes from large numbers of people working together in solidarity. It's a democratic power and serves the best interests of the great majority of people. All of Bloomberg's rhetoric about unions being responsible for a failed system is B-U-L-L. He and other billionaires are making the power grab of the century, of the millenium, and they are doing so by dividing us, setting us against each other, and making us ashamed of our power--the power of our union.

That was until Wisconsin. The rallies in Madison were not called by the union leadership. People went out and stood together, joined by a common cause of defending the right of collective bargaining. It is so important to hold on to that right because it gives us power when bargaining with very rich,powerful people and entities who have no problem returning us to the times when these words described the harsh reality of American workers:

Sixteen tons, and what do you get?
Another day older and deeper in debt.
St. Peter don't you call me, 'cause I can't go.
I owe my soul to the company store.

There is no need to apologize for having taken power away from those who forced people to live like that. We should be exceedingly proud of workers who joined together to seize power from the rich and give it to the poor. Why would we ever want to go back to the way things were? Would that be putting children first?

Somewhere in my lonely battle with the forces of Bloomberg, I lost my pride as a union member. Thanks, Wisconsin for giving it back to me.

All of the protests in WI have ignited many people across the nation to join together and take action. In my "right to work" state of FL, I chose not to join my union -that is, until I saw what happened in Wisconsin. Then, I realized that there is power in numbers. I have joined my union (Thank you, Gov. Walker of WI!) and have joined Save Our Schools and National Call to Action.

I appreciate you so much for providing a link to our website on your webpage. There are many teachers and parents who have signed up to participate in the Save Our Schools March on DC that is coming up in July. I would like to invite you and your readers to participate in our April campaign, which is “We Won’t Be Fooled Again.”

We hope to make readers aware that the proposed legislation for reauthorizing NCLB will not work any better than the 2001 legislation did. If you blog on that subject or RTTT or Blueprint, please send your post to us at saveourschoolsmarch@gmail.com so that we can include it on our website under the theme. Or, if you are on Twitter, here’s the hashtag if you’d like for your tweet to show up on our Twitter feed: #wontbefooled