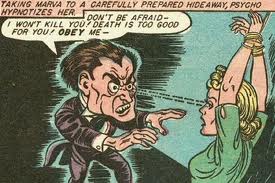 In my last post I published a letter from Principal Perry.

However, as a trained Perry profiler, I am going to include in red letters what she left lurking between the lines.


Here's the profiled version of her letter.

I have been advised that you are retiring, (you sent me an email on November 15, but I didn't acknowledge it then, and I'm hoping you didn't keep a copy so that I can accuse you of retiring without proper notification) but we do not have the necessary paperwork (do you really expect me to tell you what the necessary paperwork is?).  Therefore, (so you actually thought you could get away from me without charges, did you?  Yeh, yeh, yehhhh)   I have scheduled an appointment for you to meet with me in my office on November 19, 2010 at 3 p.m. (Hopefully the Rubber Room has made you brain dead enough so that you'll actually show up).  The purpose of the meeting is to discuss the report of the Special Commissioner of Investigation (Yes, the report that took one year, nine months and 14 days to fabricate) which concludes that you made inappropriate statements to a student (Inappropriate?  That's all that idiot Hayden Sands could come up with?  I told him to get the kids to say you ABUSED them.  Can't those stupid, @#X^%$#&^%*&^^ get anything right?) and you did attempt (I love putting "did" in front of verbs.  It's sounds so biblical) to tamper with both a verbal abuse and corporal punishment investigation.  (It's all your fault the parents came in wanting to know why I had forced their children to write false statements about you and then told them not to talk about it with anyone--especially not their parents.  They never would have found out about it if you hadn't done home visits to those kids who threatened to frame you for child abuse if you told their parents about their misbehavior.)

Because this conference may lead to disciplinary action, you may bring a union representative.  (Yes, I know.  As a retiree you don't have a union representative anymore, and I have no right to call you in, but, dammit, you're not going to get off so easy after all the work it took to frame you.)


Sincerely, (I'll get you, you bitch)

Principal  (That's right, Leadership Academy Principal, never taught in a classroom, so what? If Bloomy doesn't care, why should you?) Perry
Posted by Moriah Untamed at 6:41 AM

I really have no words for this one.
I am so sorry you had to go through this.
There ARE no words to describe what you have gone through.

I never thought retirement could be this good. No disciplinary meetings ever again.

Did you actually have a meeting or was she not able to get her way this time?

Would it be okay if I link your story to my post about fear? I worked for a principal who administers her school through fear and bullying.

Mine is yours. Creative Commons.

As far as your question is concerned:
I am R-E-T-I-R-E-D.

That's my answer to the DOE.

Whatever happens as a result of that answer will be on my blog.