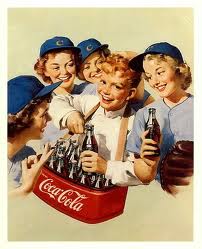 I hate to admit it, but I hadn't heard about the campaign to boycott Coca-Cola because of the company "allegedly turning a blind eye as eight employees of Coke bottlers in Colombia were killed and scores more were threatened or jailed on trumped-up terrorism charges over the past decade".  By the way, that quote was taken from a January, 2006 article published in Bloomberg Businessweek called "Killer Coke" or Innocent Abroad?
I purposely quoted the Bloomberg article and not other sources, so that no one can say he knew nothing of Cathie Black's link to the "Killer Coke" controversy.
However there are other sources that are extremely interesting and informative.
Read about Cathie Black and the rest of the members of the Board of Directors.
Read details about Coke's alleged crimes in Colombia other countries.
In case you decide to boycott Coke yourself, read about its other products (you won't boycott Coke by drinking Sprite).
Are you feeling sorry for Cathie Black?  After all, you might say, an allegation isn't a guilty verdict, is it?
Isn't it?
If you're a Rubber Room detainee, it is.
Posted by Moriah Untamed at 10:58 PM

It's un-American to ban Coke. I'm sure it's not all bad.