Sorting Out the Bloomberg Way 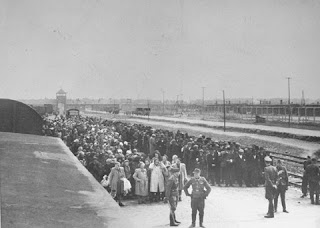 A scene like this flashed through my mind as I was being sorted out by security guards last Thursday.

"Teachers who have been charged with something by a Bloomberg principal go to the right to be checked for weapons.  Regular workers go to the left and bypass the scanner."

"Teachers who have been charged with something by a Bloomberg principal, we suspect you might go berserk and kill us one day.  Regular DOE workers we don't suspect you of being violent."

"Teachers under 3020a charges.  You're assumed guilty because you've been charged by a Bloomberg principal.  You might be dangerous.  DOE workers you haven't been charged yet.  Better hope you never are."

Blue Badgers should know that there is something wrong with Red Badgers.  What better way to prove it to them than to force Red Badgers to be searched for weapons at least twice a day:  once in the morning and once at lunch.  Suspicion is good enough.  No need for proof.

We know how it all ended for most of the people in the photo.  This was the last sorting many would endure.  But how did it begin?  How did these normal people who probably never committed a crime in their lives end up being put to death?  How did the world go so crazy?

How exactly do you intend to stop it from happening?  Building memorials to the Holocaust?

You've got law abiding teachers who have never gotten so much as a ticket for a moving violation being searched for weapons twice daily as if they were terrorists.  And most of them are taking it in stride.

Our Union is "working on it".  Now we don't have to sign in and wear a visitor's sticker on our clothes to identify us as Red Badgers. But we still have to be scanned twice daily.  I personally still sign in and demand a visitor's badge, although I don't display it on my clothes.  I want written proof that the DOE has treated me like a terrorist and put my health at risk.

To date I have been searched for weapons SEVEN TIMES IN THREE WORK DAYS.  I have seven visitor's stickers--one for each time I was scanned.

If you think I'm going to let this rest.  Think again.
Posted by Moriah Untamed at 6:01 PM

Could you take the City of NY to court? Is there any that the legal system can handle the situation?

There are ways that individuals can take the city to court, but our Union dues are supposed to pay for this to be done for us. As of today, the Union is "working on it". Fighting things out with City Hall as an individual is a long and expensive process.