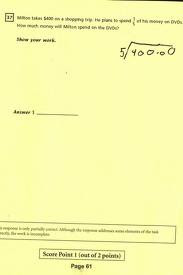 It was the 2001-2002 academic year and the New York State Math Test had just been administered.  In schools all over the city,  teachers for each grade sat around a table correcting the tests.  Rather than marking the tests of their own students, Jude and the other 4th grade teachers in her school split the work by assigning each teacher to grade the same two or three questions on every 4th grader's test.

There was a very detailed scoring guide for each answer, and Jude carefully read it before marking each student's test.  The other teachers criticized her for being too slow, but she told them that she wanted to be meticulous so that she could be sure that she was giving each student the mark he or she deserved.

After the tests were all graded, the principal published the scores of all the students together with the average for each teacher.  Jude was surprised to find that her students had scored lowest of all the other fourth grade classes.  The highest scoring class was that of the senior teacher on the grade--the one with the most seniority.  She took a closer look, and noticed that the second most senior teacher had the second highest scores, and so on down the list until she reached her name, with the lowest scoring class and the least seniority.  Not only that, but she had walked around the classroom and glanced at students' tests while she was proctoring.  She had been happy to notice that some students were doing very well.   Now she saw that these same children had received very low scores considering what she had observed during the test.

The tests were about to be sent out of the school building to the district office.  Once they were gone, there would be no chance of hiding what might be a very embarrassing case of test tampering.  She decided to tell her principal who delegated the investigation to her assistant principal.  Sure enough, the A.P. found that a large number of tests had been graded incorrectly.  After the tests were regraded Jude's class was first or second of all the fourth grade classes--she can't remember which, because that's not what she cared about.  She cared that her students had not received the grades they deserved.

You might be saying--This isn't a crime.  It certainly can't be compared to the Rape of Gertrude Perkins.

No.  This isn't THE CRIME.  It's just the beginning.  A little step out of bounds.  It was all resolved in-house.  No one got sent to the Rubber Room.  But Jude's life would never be the same.
Posted by Moriah Untamed at 9:50 PM