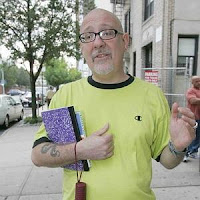 Hal Lanse would like us to email Mike Mulgrew because he has been suspended without pay or health benefits.  According to law, teachers cannot be suspended without pay until they have a hearing in which  the Department of Education must prove that there is just cause to terminate the teacher.  Until the hearing takes place, and a judgement is given, the DOE must pay the teacher.  If the DOE is allowed to get away with suspending teachers without pay, a dangerous precedent might be established and other teachers might be summarily suspended as well.

Ok.  That is very well and good.  I believe we should act in solidarity.  However, if you read Mr. Lanse's account in his own words, you will find some details that might bother you as much as they  did me (or not).

"I was given no work for two weeks until I fell asleep on a couch."

"I refused to sit in the corner as ordered. My lawyer says this is corporal punishment."

"I refused, however, when the DOE stooped to ordering me to put paper clips on stacks of papers."

"Last week, my supervisor yelled at me ....I filed a complaint. The DOE refused to log-in the complaint, so I followed the UFT's advice and called the police. "

Hal, we're not in the Rubber Room anymore.  You have just given us an example of the kinds of behavior that people got away with in the Rubber Room and nothing ever happened to them.  People would fall asleep in their chairs.  Nobody cared.  People would get in screaming fights with each other,   They'd get written up,  and absolutely nothing would happen.  People called 911 and filed police reports on other teachers, on security guards, on administrators for the most minor, stupid reasons.    People came to work looking like the homeless, dressed in dirty, worn out old clothes.  Some people smelled.  Others took to smearing the toilet walls with their own feces.  No matter what people did, they were not suspended without pay.

We don't have that kind of protection anymore.  We are in a work environment.  No, we don't have anything to do.  What a terrible waste.  I have a Masters  Degree plus 60 credits in the sciences, but I am doing the work of a file clerk.  Boo Hoo.  I am a 100,000 dollar a year file clerk. Boo Hoo.

That doesn't stop me from trying to look and behave like a professional.  No matter how badly the DOE slavebrains behave, it's no excuse for us to lower our own professional standards.  We need to be better than they are, and we need to organize as a group.

Now that you are suspended without pay, Hal, you call for an organized action.  You had good reason to do so when your charges were dropped, but you were not placed in a school.  Put out the call:  All "TRC personnel who should be placed in a school, but who are doing nonteaching jobs meet at Joe's Diner on the corner of blank and blank streets."  Meet.  Strategize.  Call for actions that cannot be used to terminate you or suspend you, for now.

Instead you protested alone, and now you're suspended alone.  And you've opened up a possible precedent for others to be suspended.

Is the Union right?   No.  Is the DOE right?  No. If you want to do something about it, don't fall asleep on a couch.


Oh, yeah.  Mike Mulgrew-- The agreement that you signed with Klein has been violated on so many levels, that it has become totally irrelevant.  If you don't grieve the violations, you are complicit.  Telling us to file grievances when many of us are whistle blowers who are here precisely because we filed grievances just shows what a hypocrite you are.
Posted by Moriah Untamed at 11:48 PM

PERB (the NYS Public Employment Relations Board) should be contacted about all of this!

It would probably also be helpful to copy communications to PERB to the New York Times and the Albany Times Union.

Do you see what happened to Hal when he called 911? He got suspended without pay. If you file PERB charges you will be retaliated against. I'm not saying don't do it. I'm just saying that whistle blowers will suffer retaliation. Proceeding on a case by case basis does not seem to have worked for us. If we are going to file PERB charges, we should do so by joining together in as large a group as possible. The DOE has most of the power on its side when it is fighting one lone teacher. Our NYSET attorneys pressure us to settle in spite of the fact that we are the victims not the perpetrators.