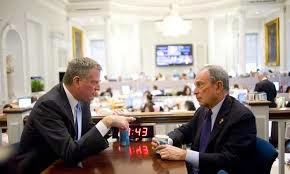 Yes, Bloomberg, the man who assassinated (notice the two asses) my career and the careers of hundreds if not thousands of teachers, will not be Emperor/King/CEO/Dictator/Fuhrur/Tyrant of New York much longer.  I would be more hopeful that NYC politics would move toward more democratic principles--but that's the HOPE FOR CHANGE I had when Obama was elected. It didn't happen.

One man does not make a Democracy--but a few very rich and powerful men, can destroy one.

Now, what about Principal Sh _ _ _ _    T _ _ _ y?   Will the principal who lied and got children to lie for her be fired?  Or will the new mayor recognize the advantages of having loyal slaves who do as they are bid, no questions asked.  I'm taking illegal bets.

And yes, I am back.  How could I resist contributing to the METTADATA at a transitional moment such as this?
Posted by Moriah Untamed at 2:05 PM

Welcome back. I missed you.

Thanks. I didn't think anyone would notice.

Sorry for your losses, P.O.

Sorry about your situation, Bronx Teacher. I've literally been there. Same methods were used on me.