Tenure: Job for Life or Life of the Job?

This is a story from the times when teachers did not have tenure. This is the world that Bloomburg and the other billionaires want to return us to.

I have copied excerpts from the book, It Did Happen Here: Recollections of Political Repression in America. You can find it on Amazon. 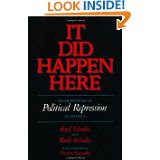 "...I  started to teach at Warton School when I was twenty-three (1906).  From that time forward, I found myself in a little group, a little complex of young men who held what you would then call the liberal progressive point of view of Bob La Follette and Theodore Roosevelt.  We were a rising generation of progressive thinkers, young people who had more or less the same background.  We were beginning to recognize domination by big business over not only the pocket book of the country but the mind of the country.

I don't know why I was the one in our group who eventually got fired.  I suppose it was because I was rather vocal...

...The employment of children in industry for wages had become a controversial issue.  There was a labor department of the state government, but comparatively little regulatory legislation.  And nobody paid any attention to the factory laws we had.  They weren't intended to be enforced.  The employers and manufacturers did about as they pleased.

Pennsylvania child labor became notorious in the textile mills, in the glass factories, in the nuts and bolts shops, and other shops producing small things children can handle.  And it was notorious in the mines.  All through the mine there were wooden partitions that sealed up each section so it was more or less poison-proof.  When they shot off blasts in one section, the partition was closed so the other side continued to have fresh air.  Children stayed by the doors to open and close them at the proper times...

...I became interested in the conditions surrounding the employment of children in factories, mines, and other workplaces in my native state.  Child labor had become so notorious that the Pennsylvania Child Labor Committee was set up to oppose it.  I joined that group, and after two years I was made secretary.  I gave many speeches throughout the state condemning the exploitation of children.  I went to women's clubs and other organizations where people had no idea there was such a thing as child labor.  But the university authorities thought I should confine my activities to the classroom and should not speak in public.

I taught at Wharton School for nine years, and until the last year I was only an instructor.  Now, usually after the first three or five years, if you didn't get promoted you were dropped from the teaching staff.  Generally speaking, if you did your job, and unless there was some extreme reason like a divorce or a scandal or something of that kind, you were promoted.  Either you did yr job and got promoted, or you didn't do your job and were dropped.  I did my job, but I didn't get promoted.

When promotion time came around and they passed me up, the North American, a Philadelphia businessman's paper with an editor who was more or less of our way of thinking became concerned.  It raised the question, Why is this particular teacher passed over?  I had taught as well as I could.  My classes, were well attended.  The boys and the girls in the classes were, what shall we say, well satisfied.  They thought they were learning something.  I began to get more speaking engagements outside the university.  Macmillan had published six of my books.  Two of them were textbooks which were selling very well.  Nevertheless, year after  year I was kept on as a teacher but not promoted academically.

I didn't think I was going to be able to make a living teaching for more than a few years.  I'd probably get kicked out.  You see, a teacher has an ethical problem:  Shall he keep his job, period, and do whatever he must do to hold it?  Or should he risk the livelihood of his family by telling the truth, whatever it happens to be, and perhaps find himself out on the street?  In that case you have a profession and you can't practice it anymore.  I knew in advance what I was going to do.

I was dismissed on the sixteenth of June, 1915, in a curt letter from the provost of the university, Edgar F. Smith.  He wrote, "Dear Mr. Nearing:  Your services at the university will not be continued after this year."  In other words,  you're fired.  They never talked to me.   They didn't even bother to explain except to say, you'll not be hired another year.  And they waited  until the faculty left the university until the whole place was on vacation--when they pulled this thing off.

A North American reporter went to see J. Levering Jones, who was one of the most influential of the trustees.  There were twenty-three trustees representing twenty-three points of view of business.  The reporter said, "Why have you dismissed this man?"  Mr. Levering Jones answered, "When I dismiss a stenographer, do I have to give a public reason?"  So that was our status.  Like any stenographer, if you didn't do  your job, out you went.  And that was the extent of academic freedom in 1915 and throughout that period.  There was no tenure, no such thing..."