How many New York Post journalists does it take to perform a Google search on the exact location of a NYC public school?  More than three, it would appear.

In my last post I referred to the article written about Amy Woda and other teachers by NY Post journalists Carl Campanile, Reuven Fenton, and Yoav Gonan with a photograph by Gregory P. Mango.
The article reported that Amy had been brought up on charges for nine specifications of incompetence, and I promised to come up with at least nine specifications of incompetence against the journalists.

PS 62 is in RICHMOND HILL, not FOREST HILLS. 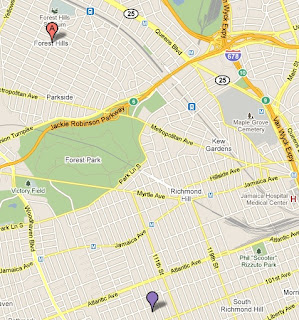 Don't get me wrong.  Richmond Hill is a very nice neighborhood full of very nice people.  It's just not Forest Hills where the US Open takes place.  Compare house prices if you don't believe me.

To place Amy's school in Forest Hills is to mislead the reader into believing that she was serving a very different population of students and parents.  New Yorkers who read this article will have a blink of a think--barely noticable to the thinker--"Well, if she can't teach in that neighborhood, she can't teach anywhere".

SPECIFICATION OF INCOMPETENCE #1 -- NY POST journalists misled their readers as to the location of PS 62 and the type of student population attending PS 62 by failing to use Google or any other search engine to verify the correct neighborhood where said school is located.
Posted by Moriah Untamed at 10:18 AM