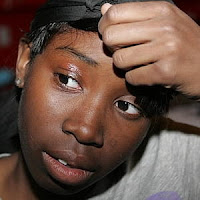 According to an article in the NY Post written by intrepid reporter Erin Calabrese, the young lady in the photograph above was shoved and punched by a teacher.   This supposedly happened on Wednesday, April 28, 2010.  The article appeared the next day, Thursday.

I was going to write about it as soon as I read the article, but I thought I'd better let myself cool off first.  I'm glad I did.

And it's not just her name and face that we have.  We now know that Tytahnisha is 15 and in 8th grade, and that leads one to the conclusion that she's been left back twice.

We know Tytahnisha's first and last name, her sister's name and her mother's name.  We know what she looks like.  We know her age, what grade she's in, and where she goes to school.  We know she has some kind of learning problem.   The only way the Post could have put her picture and full name in the paper and online was if her mother signed a waiver.  Am I wrong?  Please correct me if I am.

But the victimization doesn't stop there.  Have you read the comments?  There are 84 at last count.  Whether they believe her story or not, few if any are on her side.  People make fun of her name, the names of her mother and sister, the fact that she was left back, the fact that you can't see any so-called wound in the picture.  They say she deserved to be walloped because she pushed the teacher first.  They call her ghetto.  They hypothesize that this  family is on welfare...  that she is retarded...  And on and on.

Did she actually get punched and shoved by the teacher?  I doubt it.  The teacher is 44 years old which means she has probably been in the classroom for more than ten years, and has experience working with students like Tytahnisha.  I think Tytahnisha did the shoving and punching and, with the help of the DOE and her mother, engineered what I call a Guilt Flip.  She flipped her own guilty actions onto the teacher.  The so-called wound?  She could have gotten that in the riot that she initiated.

If I am right, this is the worse victimization of all. She has been taught that she does not have to take responsibility for her actions if she can figure out a way to blame them on someone else.

However, she and her mother have learned that the good old Guilt Flip can snap right back in your face--especially if you let it be photographed by the New York Post.
Posted by Moriah Untamed at 11:42 PM

Mommy could have possibly smelled a money-making opportunity.

Combined with the "cult of victimology" as promulgated by the ahem "reverends" Sharpton and Jackson shaking down organizations, firms etc. for wealth has become an apparent occupation within the USA.

However... it appears to me that something of a backlash has begun and the embedded guilt planted within many USA citizens is wearing this and folks are tiring of those who blame others for that the complainer caused to happen.

I agree with you on your opinions on the matter. It is sad and scary that the country has this girl's information and can find her at any time. Mothers should protect their children, not parade them around as a spectal in a freak show. 15 years old is too young to have to deal with all of the harsh comments made by whomever because they do not have to own up to it. The mother needs to take responsibility and teach her daughter to do the same.

Without Responsibility there can be no RESPECT.