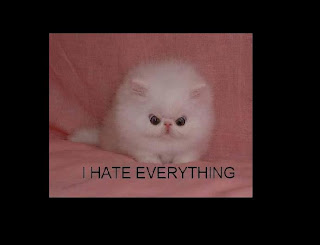 Hatred is a poison and it's antidote is compassion, according to the Buddha.   I was raised a Christian, and that is basically what Jesus said too, in different words, but Christianity didn't help me deal with the Bloomborg like Buddhism did.  Meditation, focusing on the breath, living in the moment.  That's what helped and continues to help--but compassion for them?  Not feeling it.  Can't even imagine feeling it.  The best I can do is live in the moment where Principal S.T. and the rest of the Bloomborg do not exist.  They are not here.  I don't have to think about them.

If I do think about them, I hate them.  I thought with time and distance the hatred would lessen, but it has actually grown.  It has grown to encompass everything related to education.

I have to stop here to say that I have no plans to do damage to persons or property as a result of my anger and hatred.  Those people aren't worth the effort to do the crime,  much less the pain of doing the time.  I deserve to suffer less, not more.  Therefore, whatever suffering they might find in life, and I hope it's a lot, won't be because of me.  I can't speak for others, but the fact that not one New York City teacher has gone postal after everything they have put us through,  shows that I am not the only one who has been able to deal with negative emotions without resorting to violence.

So let's see, how much do I hate thee?  Let me count the ways.

I hate the word "differentiation".   You never heard that word before the Bloomborg invaded (except in Earth Science class) .  Now people are slipping it into their discourse with smug self-satisfaction as though mouthing the word somehow proves what a good teacher they are.  Slave brains.

I hate everything written about testing and teacher ratings as if it's all about improving the educational system for the dear little children.  That's a big fat lie.  It's about privatizing public education for profit--not for children, but for money.  Emphasize it.  Repeat it.  Money, Greed, Profit. Hedge-funders.  The 1%.

I hate it when people begin a sentence with, "Of course, we all know teachers who should not be teaching, but....."  Come on, stop it already.  It's been a decade since Bloomberg began to cleanse the profession of "the few" bad teachers.     I don't have access to the data (does anyone?) but I'm willing to bet that they've gotten rid of half the teachers who were teaching when Bloomberg first came into office.  But it's not enough.  The bad teachers are still there--just look at the teacher ratings.  Face it.  If you have tenure, you're a bad teacher and your days are numbered.

I hate the way the UFT treats, as an isolated case,  each teacher up for termination and each school slated for closure.  Once the Bloomborg locks onto its target, the result is inevitable.    Wake up, people, it's death by a thousand cuts.  Stop allowing teachers and schools to disappear without a fight--a unified, citywide fight.

I hate most of what is written about education and the people who write it.

I hate it when people say they don't hate the person, they hate what the person did.  What does that mean?

I hate what you people did to me, and I hate you for doing it.
Posted by Moriah Untamed at 7:46 PM

Honest and raw post. Many of us feel the same way. Thank you.

You do seem really angry and it is probably a good thing that you are no longer in the classroom. Your contempt for children and their families would be picked up by them in a heartbeat. I, for one, support any additional taxes, fees, etc for public education. However it is rants like yours that make me want to work hard as an advocate to add the policy caveat that no increase in fees/funds should go to teacher salaries or benefits. Increases in public funds to public schools should go to the families of at risk children and provide them the materials that can help them succed.

You DO sound exactly like Liar Principal S.T. She DID love to put the do-did-done in front of verbs for emphasis. Perhaps you are Liar S.T. or maybe all you Bloomburgers just talk alike.

It is not "probably" a good thing that I am no longer in the classroom--it is an exceedingly good thing. I can no longer respect the system or the people in it after the way they have hurt me. Yes, they were manipulated by Bloomburgers like you. No, perhaps they didn't understand how much harm they were doing to me, but that can't erase my pain. I need to be far away from all of you to heal after what you did to me.

However, before Liar Principal S.T. showed me how easily children, parents, teachers, and human beings in general, could be corrupted, I had the highest respect for them. Innocence is Bliss.

No one cares what you DO or DO NOT advocate. You are a Bloomburger. You are not a part of the 1%, but a slave to them. You serve their interests, not your own, not the interests of 99% of the world's population.

As for teacher salaries and benefits: The economy is in big trouble when people covet a teacher's salary. Teachers are supposed be poor, aren't they? For years I worked long hours for very little money compared to other wage earners. Bloomburgers like you showed contempt for me because I earned so little. I didn't care-- I was doing the work I loved. Now people like you have lost their jobs and they look at teachers, who are supposed to be poor, and see them in a better position, and their contempt has changed to jealousy. Behind your sanctimonious "advocacy" which claims to care about "what's best for the little children" is nothing but a covetous soul. Just another Bloomburger.

Good for you Moriah Untamed. I can relate to what you are saying. I did not start out with a dislike for students, administrators or authority. But over time, I became disgusted how each used the other for expediency. Students who did not do their work or misbehaved complained when grades were low or their were consequences for their poor behavior, The complaints were never directly about grades, they were usually about something I had done, perhaps months before. "Blow in the wind" administrators used the complaints to assert my classroom management wasn't up to par. By the time I left it was a feeding frenzy of complaints, where the lowest life students got their parents to complain. The final few paragraphs my district's hr thug wrote stand out in irony. He claimed I did the exact opposite of my intended purpose as an educator after students complained because I filmed them while they were supposed to be finishing final projects. These kids were mostly getting Fs and it was "payback time."

What hurts the most is having given the best years of my life to such a corrupt, rotten institution. Even if the crummy kids had behaved as they did, it would not have been so bad if admin had stood with me. Make me think of Ibsen's "Enemy of the People."

The fact is that if the powers that once someone is targeted, *anything* they do can be used against them, even the most innocuous actions.

And once someone becomes aware they're a target, they can do nothing *easily* or *innocently* anymore, they are always fearfully self-evaluating -- which makes all their actions more clumsy and easy to attack.

It's a vicious circle, but the fact remains:

It's the targeting that creates the witch hunt behavior, not the supposed 'witch'.